Often you can see evidence of contact between your fletching and your arrow rest by examining your fletching closely. Fletching contact with the arrow rest is the number one cause of poor arrow flight for those not using drop-away arrow rests or full-capture arrow rests.
Hunter shown wearing Mathews Lost Camo.

Once you get past the basics of setting your arrow nock point and arrow rest positions, bow tuning comes down to troubleshooting. You learn to respond to what the arrow is telling you. Within this process of elimination five situations frustrated one bowhunter badly during his early climb up the learning curve. By avoiding these five mistakes, you will tune your bow more quickly and with less mental anguish.

Arrow fletching contact is the most common bow tuning problem regardless of the arrow you shoot, but is even more prevalent among bowhunters who use small diameter carbon arrows. If you can’t get your carbon arrows to tune, or if the fletching shows damage from hitting your arrow rest, you need to eliminate contact before you will ever experience perfect arrow flight.

From the many questions that are asked about straight fletching from bowhunters, there are many out there searching for any possible solution to the contact puzzle. Straight fletching is not your savior because without any spin to stabilize their flight, your broadhead arrows will be very erratic. Even if you shoot mechanical broadheads, there remains a small amount of exposed blade surface so you still need at least some helical offset to stabilize their flight.

There are two other options that are much better than straight fletching. You can either use a drop-away arrow rest with as much helical offset as you wish or you can work with conventional arrow rests and reduce the amount of helical you use until you can get the fletching to pass cleanly through the arrow rest.

When working with a conventional arrow rest, the best course is to try four-inch feathers. Feathers will forgive a little more contact than vanes, especially after you’ve “broken them in”. Eventually, the feathers will get soft in the area of contact and will be even easier to pass through the rest without affecting arrow flight. These shorter fletchings will improve clearance on the small diameter carbons because they don’t wrap as far around the arrow shaft when properly attached with a helical clamp.

The Out Of Time Two-Cam

If your two-cam bow is mysteriously tearing the paper of your tuning fixture either tail high or tail low and you can’t eliminate it by moving your arrow nock point or adjusting your arrow nock rotation you likely have a problem with your cam timing. One bowhunter once spent all his spare time for several days trying to figure out why his arrows were flying tail low. Eventually he found that his timing was off. The lesson has stuck with him like a fly to flypaper – another mistake he has vowed never to make again.

Make sure your arrow inserts install perfectly straight with the arrow shaft. Misaligned inserts will cause your arrows to plane offline.

Possibly a tail high tear is caused by fletching contact, but tail low tears can almost always be attributed to improper cam timing. Before you start any paper tuning project with a two-cam bow make sure it is properly timed. Checking and setting cam timing should always be priority number one.

Keep in mind that timing is not related to string stretch, only to differences in the amount your harnesses stretch. To check your timing, have a friend watch as you draw the bow to make sure both cams are turning at the same rate. You can use any reference that makes sense in visually comparing the cams, but some like to use the end of the harness track. You can even watch these locations yourself as you draw the bow to make sure that the harnesses touch the very end of the track at exactly the same instant.

Also check your harness tracks themselves. A bowhunter once spent several hours trying to figure out why his bow was shooting best when the cams well out of time until he noticed that one of the harness tracks had become filled with dirt that had dried in place and now threw the timing off.

Shorten the harness that attaches to the cam that is reaching its full draw position first. You’ll need a bow press (any of the portable models will work) to relieve the tension on the string and harnesses before you can attempt this task. Most archery shops will have presses if you and your buddies don’t. Shorten a harness by twisting it one or two turns in the direction of the existing spiral. Replace the end of the harness and test it again. Eventually, you’ll get it perfect.

Short arrow fletchings work well with carbon arrows. You can apply them with an aggressive helical offset and still achieve good clearance between the fletchings and the arrow rest. Hunter shown wearing Mathews Lost Camo.

If your bow begins shooting poorly without explanation you should check your string. If it stretches, your draw length and draw weight will increase and the position of the arrow nock point compared to the arrow rest will change.

Almost all arrow strings will stretch after you install them. (The only ones I’ve seen that don’t are pre-stretched strings from custom string makers. One such is Winner’s Choice (541) 575-0818). Most stretch in conventionally made strings takes place in the first 200 to 300 shots but it can occur after that point too if the bow is left in a hot car, for example. If at some point your arrows start to fly and impact strangely and your draw length increases simply put your bow in a press, remove one end of the string and shorten it by twisting in the direction of the existing spiral. You'll probably need to make a few slight adjustments to your sight (maybe even your peep position) to finally put everything back on track.

Arrow Inserts Out Of Alignment

Full-capture arrow rests, such as the NAP Apache, produce good arrow flight because the fletchings contact the rest uniformly on all three sides, not disturbing the forward travel of the arrow. Hunter shown wearing Lost Camo.

Check your arrows by placing them in some type of cradle (notching opposite sides of a shoebox will work fine) and turning the arrow shaft while comparing the point of the broadhead to a fixed reference mark. The broadhead tip should stay perfectly still as the arrow turns. If it makes a circle, the arrow's insert is to blame. Once you’ve identified all your problem arrows, you can either set them aside or replace their arrow inserts with another brand of higher quality. Easton RPS and Arizona Archery Enterprises composite inserts (Easton also sells the AAE composite inserts under their label) have generally proven to be of good quality. To line up straight every time, inserts must fit snugly inside the arrow shaft and should actually require a light press before they will seat fully.

A bowhunter recently helped a friend tune his bow. He was left-handed and got a wicked paper tear to the left with every shot. This bowhunter shot his friend's bow right-handed and got a perfect bullet hole so he knew it was in the grip. With some experimentation, he finally fixed the problem by simply placing this thumb more firmly into the side of the grip. That’s all it took to remove a two-inch sideways paper tear. If you can’t seem to eliminate paper tears to the right or left by moving the arrow rest then bow hand torque is probably to blame. Here’s what you need to know to fix the problem.

Hand placement is one of the most overlooked aspects of bow tuning. Make every effort to achieve the same exact torque-free grip every single time you draw the bow. 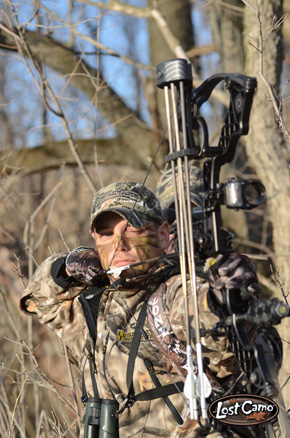 Position your hand so that you are pulling the grip straight back into your hand without any turning of the wrist or stretching sensation in the skin. Once the draw starts, don’t reposition your hand. This is seen all the time and it is an arrow flight killer. Bowhunters reach full draw and then they move their hand into a more powerful position for holding the bow. What they have really done is introduce torque. The final key is to keep the hand perfectly relaxed until the arrow hits the target.

Watch your riser as you draw the string. It shouldn’t turn at all. There are many hand positions that will permit you to achieve this end result but many great archers keep a fairly straight wrist (which is similar to a mid-wrist position) and feel the pressure of the grip primarily at the base and pad of their thumb.

If your bow is still kicking arrows to the right or left with this grip, experiment with several different positions until you find the one that produces perfect arrow flight.

Tuning can sometimes baffle logic and test patience. There’s a lot of weird stuff that can happen when you instantaneously dump 75 foot-pounds of energy into a thin tube of aluminum or carbon. Don’t be intimidated by the process; eliminating the most common tuning problems first will get you past the worst snags without causing any serious hair loss.